The McMurdo Dry Valleys contain a hydrology of subsurface water flow through the active layer. The shallow groundwater system is a series of water tracks that have been identified throughout Taylor Valley and in surrounding valleys. The main source of water to the tracks is through the melting of snowbanks. The water carries significant concentrations of solutes from the dissolution of soil salts. A dynamic climate approaching warmer temperatures and possibly increased precipitation, suggests that the role of water tracks in the valleys will intensify. Though the physical and chemical nature of the water tracks has been studied, the geochemical processes at work are not well understood. This study will analyze field data collected in water tracks near the coast of Taylor Valley in combination with experimental data collected in a laboratory simulation of a water track. One of the limiting factors in obtaining a full understanding of the water tracks is that the field sites are remote, requiring substantial funding to travel to them. Another factor that makes acquiring large datasets from these features a challenge is the short season in which they flow. A simulated water track, despite its own limitations, is an inexpensive and logistically easy method for gaining understanding of the geochemical processes that occur and how those processes affect the fluid chemistry as the water flows downslope.

What is a water track?

A water track is a relatively slow flow of water at the interface between ice-cemented permafrost (impermeable) and thawed soils of the active layer (permeable). The shallow groundwater flows downslope, beginning from the water source (perennial snowbanks) and terminating at topographic lows (typically closed-basin lakes). Water tracks contribute a small amount of water to the ice-covered lakes in comparison to glacial meltwater streams. They transport an equivalent amount of solutes compared to the ephemeral streams, however. Soil salt concentrations are elevated in water tracks as compared to off-track soils. Though the saturated layer of the water tracks is typically less deep than the active layer depth, a combination of osmotic pressure gradients, capillary forces, and deliquescence of soil salts results in elevated soil moisture above the saturated layer. On the surface, this is expressed as a lowered albedo (darkened soil, as seen in Figure A below). 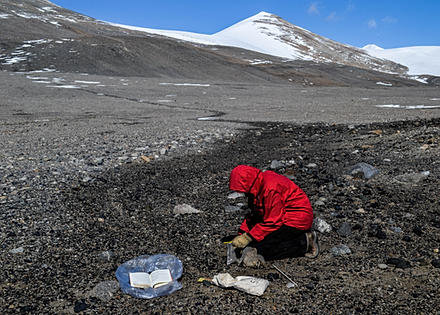 Figure A. Alex Rytel (Ohio State University) collects a soil sample next to a piezometer placed in a water track in the Goldman Glacier Basin near Lake Hoare, Taylor Valley. 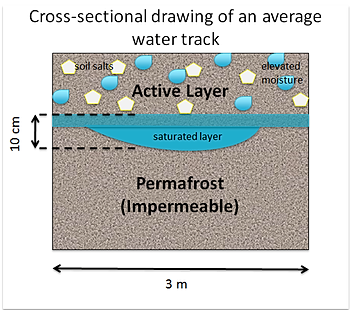 Figure B. Cross-sectional drawing depicting the details of a water track.

Two of the simplest water tracks identified in Taylor Valley, Southern Victoria Land, Antarctica are located near the coast between Explorer's Cove and the terminus of Commonwealth Glacier. These water tracks, which are less than a kilometer in length, are sourced by visible snowbanks (Figure D). 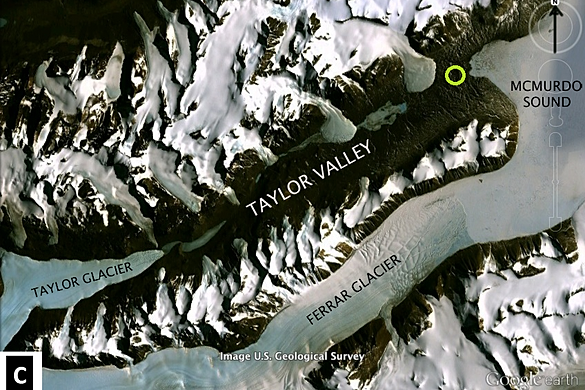 Figure C. Satellite imagery from December 31st, 1998 of Taylor Valley. The green circle marks the study area between Commonwealth Glacier to the southwest and Explorer's Cove of McMurdo Sound to the northeast. 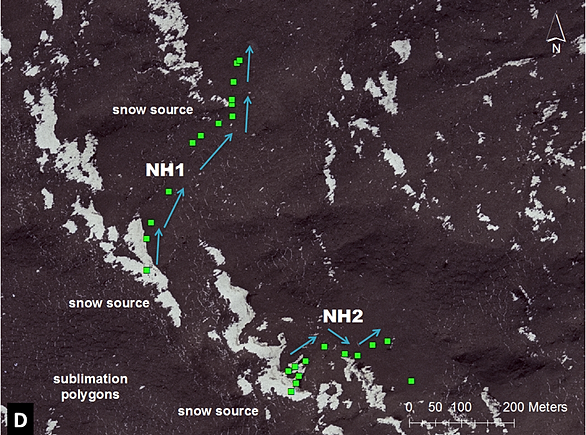 Water samples from the tracks and thawed snow samples from the heading snowbanks will be analyzed for the composition of major ions and stable isotopes (oxygen-18 and deuterium). These geochemical analyses will help us to understand more about the evaporation cycles of the water track fluids. Soil measurements from the field site, together with laboratory simulations of water tracks using a stream table, will help to paint a focused picture of how these subsurface water flows affect the distribution of solutes along the valley floors. 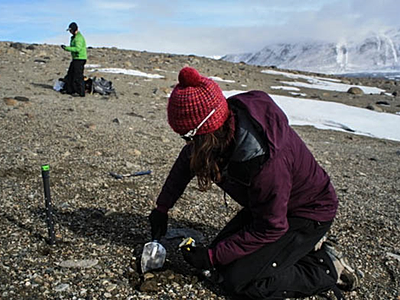 Figure E. Piezometers were placed along water tracks for extraction of water samples. Soil samples were collected both on- and off-track at locations of piezometers. 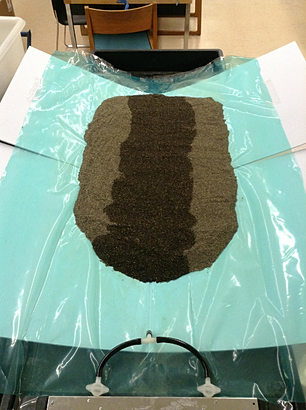